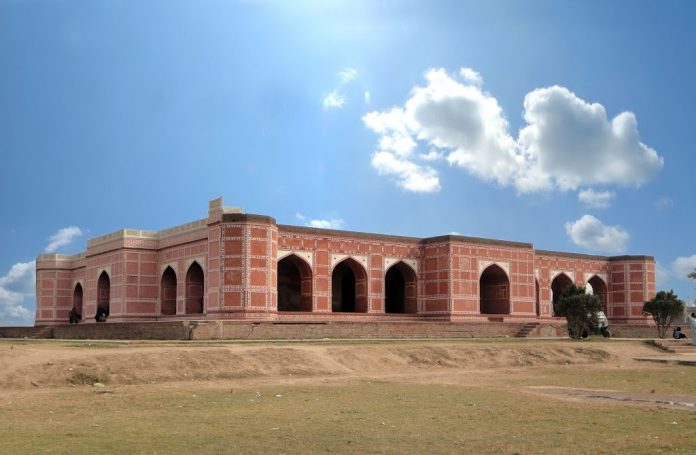 The Tomb of Nur Jahan is situated in Shahdara near Lahore Pakistan. This is a 17th-century mausoleum that was built for the Mughal Empress Nur Jahan. Empress Noor Jahan lies buried in a tomb not far from that of her husband, Emperor Jahangir. The beautiful red sandstone mausoleum is located in Shahdara Bagh, across the River Ravi from Lahore. The Tomb of Nur Jahan is part of an ensemble of nearby monuments, including the Tomb of Jahangir, Akbari Sarai, as well as the tomb of Asif Khan.

In the 18the century, the Tomb of Nur Jahan was plundered by an army of Ranjit Singh.  And the tomb was stripped of its ornamental stones and marble during the occupation of Lahore. And material & marble was used in decorating their Golden Temple in Amristar.  Even The Sikh ruler opened the grave of Nur Jahan and ordered her skeleton to be thrown to dogs and wolves. It has been said that half the Golden Temple’s splendor derives from marble plundered from Nur Jahan’s shrine.

Nur Jahan’s tomb was separated from the other monuments by open fields. Then later interrupted by the construction of the Lahore to Peshawar Railway Line during the British rule.  Also, Quranic verses are inlaid in marble on the cenotaph. Nur Jahan was the most powerful Mughal Empress.

During her reign between 1611 and 1627, she efficiently shaped the expanding Mughal Empire, contributed towards religious causes, and helped foster overseas trade. The Tomb of Nur Jahan suffered under British rule when a railway line was built between the tombs of Asif Khan and Nur Jahan. The tomb underwent minor repairs but is slated for major restoration.

Mehr-un-Nissa bestowed with the title Nur Jahan spent 18 years with Mughal Emperor Jahangir.  she died at the age of 68 years and much of the mausoleum was most probably constructed during her lifetime. She was the fourth child of Asmat Begum and her husband Mirza Ghiyas Beg, who had both immigrated from Persia. a migrant from Persia, who along with his family had fled to Hindustan, and rose to exalted positions in the cosmopolitan court of Akbar.

She married Jahangir in the sixth year of his reign, and, because of her abilities, soon became the fountainhead of authority at the Mughal court. The Tomb of Nur Jahan took 4 years to finish with the cost of 3 Lakh Rupees. The Tomb of Nur Jahan lacks a demarcated boundary and mostly serves as a cricket ground for local boys. Indeed, it’s really amazing, how an average king gets himself a masterpiece, and perhaps the strongest woman of the Mughal timeline is unable to carry that strength to her lasting abode.

The Tomb architecture was built on a podium in the takhtgah style. The platform measures 158 square feet, and the tomb is in the shape of a square and measures 124 feet on each side and is 19.6 feet high. Minarets may previously have risen from the corners of the mausoleum, similar to the nearby Jahangir tomb.

The tomb stands in the center of a Persian-style Charbagh. The original garden no longer survives, but once included tulips, roses, and jasmine. Noor Jahan, along with her widowed daughter Ladli Begam, lived in Lahore until her death in 1645, Shah Jahan having settled an annual allowance of two lakhs of rupees on her.

In contrast to her father’s tomb named “tomb of I’timād-ud-Daulah”, which was constructed in white marble. However, Nur Jahan’s mausoleum is primarily clad in red sandstone, with a flat roofline alike to that of her husband’s tomb. Also, the exterior features 7 vaulted arches. Which were covered with marble and wrought with flower mosaics in semi-precious stones. The central arch on each side protrudes out from the three flanking vaulted arches.

The initial photos of the mausoleum show its ravaged condition, where the bare shell, shorn of its decorative facing, with some traces of delicate fresco in internal muqarnas could be seen. Minute paneling was executed in intricate patterns and cornices are honeycomb-shaped in several rooms. The inner floor is covered with marble and the outer platform is with sandstone. The exterior, encased in red sandstone, was inlaid with floral motifs in addition to white, black and yellow marble.

The central vaulted chamber of the tomb contains a marble platform with two cenotaphs. One that commemorates Nur Jahan and the other to commemorate her daughter, Ladli Begum. This was built by Hakeem Ajmal in 1912. Moreover, the original marble sarcophagus bears decorative workmanship and the name of Allah, in the same style and size as seen in the tombs of Jahangir.

The Tomb of Nur Jahan has inscribed an epitaph: “On the grave of this poor stranger, let there be neither lamp nor rose. Let neither butterfly’s wing burn nor nightingale sing”. However, In recent times, an attempt to restore the monument has been made to look completely new, having lost the delicate traces of floral and geometric flourishes she so loved. 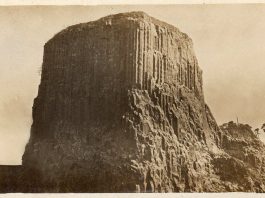 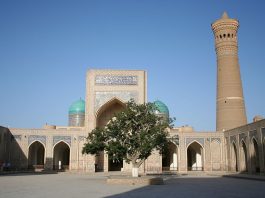 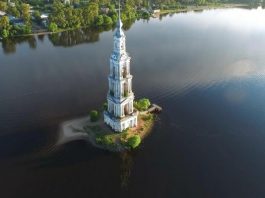 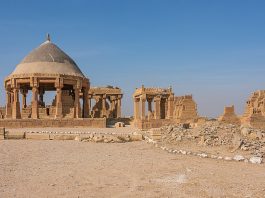 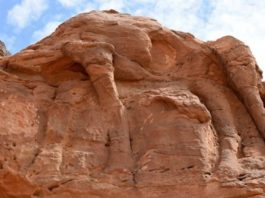 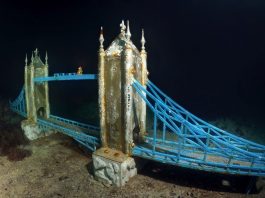