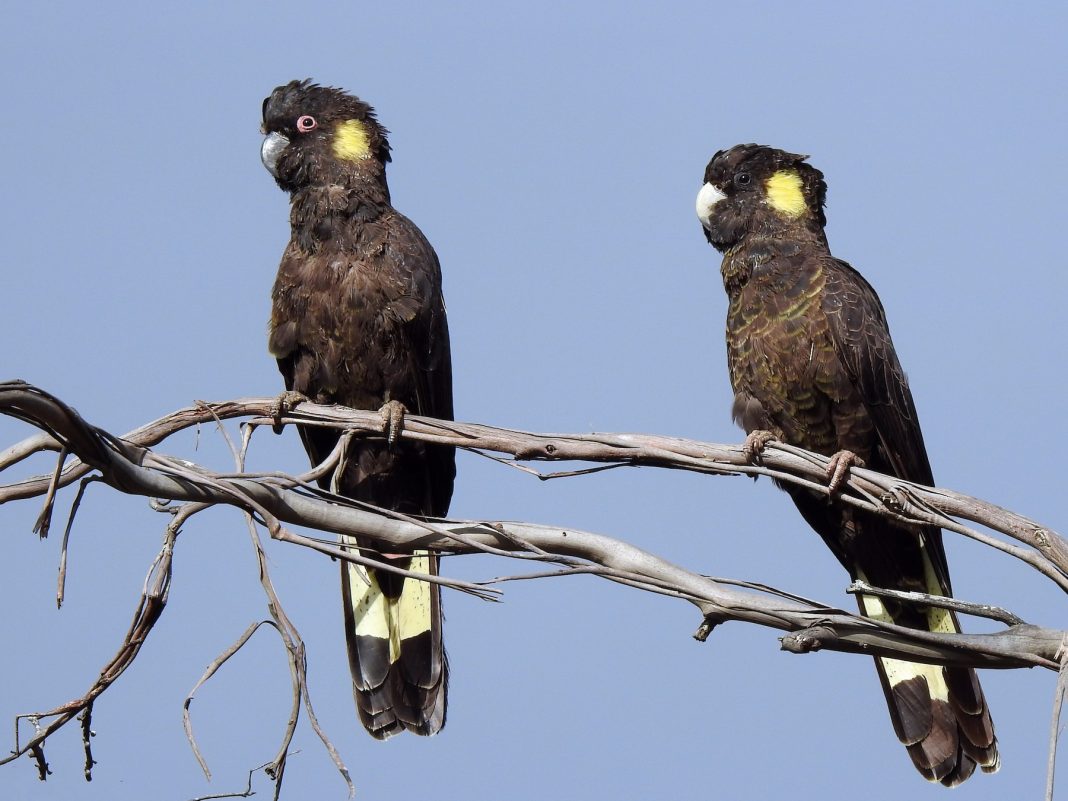 White-tailed Black-Cockatoo (Calyptorhynchus latirostris) is a large, seemingly slow-flying cockatoo that was recognized and described only recently, and today is commonly seen flying over the center of Perth or foraging in suburban gardens. When sexually mature, White-tailed Black Cockatoos pair everlastingly and return to breed in the same areas year after year, mainly the open Eucalyptus wandoo woodlands of the northern Darling Ranges and inner wheat belt.

The female bird selects and prepares a tree hollow-not necessarily the one used the previous year-and lays two eggs at an interval of one to 17 days. As soon as the first egg is laid the female, fed in the morning and evening by the male, starts incubating. Usually, both eggs hatch but the second nestling dies within 48 hours of birth. Occasionally the second nestling survives for varying periods, and in a few cases, both nestlings are fledged.

For the first three weeks, the female is still fed by the male-broods the nestling all the time; from then on until the chick fledges at the age of 11 or 12 weeks it is brooded only at night and fed by both parents. To feed, they enter the nest tail first. The young bird remains dependent until just before the following nesting season and is not ready to breed until its fourth year. After the chick has fledged, the family joins others from the same area.

Together, they move away towards the coast, where they spend the non-breeding season foraging for food. Groups from other breeding areas also flock with them and large congregate of several thousand may build up at plentiful food sources. The short, rounded bill of the White-tailed Black-Cockatoo is well adapted to the bird’s favorite food and manner of feeding. Like other cockatoos, the White-tailed is a seed-eater and feeds mainly on the kernels of proteaceous plants such as Hakea, Grevillea, Dryandra, and Banksia.

These it extracts by biting and tearing open the thick, woody capsules and cones that enclose the seeds. Most food is taken at the perch in trees and shrubs, but the birds readily go to the ground to forage on the wild geraniums Erodium. The birds will also come down to feed on fallen marri nuts or pine cones.

As soon as it became clear that the Long-billed and White-tailed Black-Cockatoos were separate species, the idea was raised that the White-tailed was only a race of the equally short-billed Yellow-tailed Black-Cockatoo of eastern Australia, its white plumage marks only resembling those of the Long-billed by chance, through evolutionary convergence.

On present evidence, its slender feet with thin attenuate claws and narrower, more tapered wings suggest that the Long-billed is its closest relative. This parrot is also known as the Short-billed Black-Cockatoo, and Carnaby’s black cockatoo.  The length of the White-tailed Black-Cockatoo is about 560-600 mm, with Zang, tail about a half-body length. The male parrot’s body plumage is dusky black; feathers narrowly edged with off-white; an underside pale edges wider, giving lighter look.

The wings are dusky, while the tail with a broad usually plain white band near the end, except for two all-black central feathers. Small patch and cheek dull white. The eyes are dark brown, with surrounding bare skin pink. The bill is gray-black, shortly rounded, and like that of Yellow-tailed Black-Cockatoo in proportion. The feet and toes are dark grey-brown. The female cheek patch larger and purer white, bare skin around eye dark grey; bill bane-colored with a grey tip to upper mandible; feet flesh-buff.

The immature is similar to adult females, but young males may have smaller cheek patches, dull-white like an adult male. However, the downy young are lang, cream-downed. The contact call of White-tailed Black-Cockatoo in flight was a high-pitched drawn-out whistle wheee-laaa lasting about three-quarters of a second, the last syllable rather prolonged. Also a single-syllabled harsh call in alarm. Fledged young wheeze harshly and constantly.

The egg-laying takes place July-November. Nest a hollow in a tree, with an entrance from 2 m above ground in some wandoo trees to over 20 meters in marri trees; entrance at least 180 mm in diameter, widening to at least 350 mm at the floor; depth at least 155 mm. Female selects and prepares hollows, lining the floor with wood chips from the sides. Eggs: two; white; oval, about 48 x 35 mm. The incubation period is about four weeks, for females. The young bird fledges in 11-12 weeks.

The distribution of White-tailed Black-Cockatoo centered in drier, eucalyptus wandoo woodlands and forests of southwestern Australia, from the Perth coastal plain and northern Darling Ranges southeastwards through the wheat belt towards Albany and Hopetoun in mallee and sand plain. Flocks wander to more coastal southwestern areas when not breeding, occasionally reaching Bunbury and the karri Eucalyptus divers color forest belt. No races.