Waterfalls are gems of Mother Nature. Their natural beauty really takes your breath away. The human being likes to see natural falls, as every year thousands of sight seekers pay a visit to unique waterfalls in the world.

Waterfalls are absolutely the natural wonders on Earth, might be a breathtaking experience, since they overwhelm with the stunning sight, as well as a splitting voice. If you are a thrill-seeker and want to see the highest, prettiest, biggest waterfalls, so here we’re jotting down a list of some gorgeous, strangest, weirdest and unique waterfalls of the world.

The Victoria Falls is the most popular waterfall, located on the border of Zambia and Zimbabwe. The water of Zambezi River falls down in a straight line for 354 ft. The waterfall is 5,604 wide, therefore water spray raises very high and can be spotted from many kilometers away.

This is the most beautiful waterfall in the world. Victoria Falls “The Smoke that Thunders”) has been described by CNN as one of the Seven Natural Wonders of the World. Each year, more than two million people visit the falls annually. A famous feature is the naturally formed “Armchair” sometimes called “Devil’s Pool”, near the edge of the falls on Livingstone Island on the Zambian side.

The amazing Iguazu Falls can be found on the border of Brazil and Argentina. Though Iguazu fall is not very high, just 285 ft, but very impressive natural scenery: it has 275 cascades that form a horseshoe and stretch for 8858ft. This is the largest waterfalls’ system in the world; divide the river into upper and lower Iguazu.

The river flows through Brazil; however, most of the falls are on the Argentine side. Its confluence with the San Antonio River, the Iguazu River forms the boundary between North American countries. The Iguazu Falls experience a humid subtropical climate with abundant precipitation and high temperatures year-round. 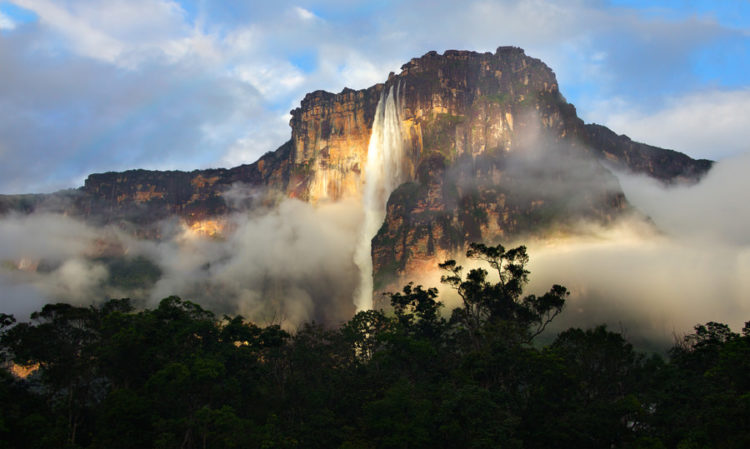 Angel Falls is the highest in the world, which falls down uninterrupted for 3,212 ft. You can visit it in Canaima National Park, which is protected by UNESCO. It is named after its discoverer US aviator Jimmie Angel. Every year thousands of visitors entice to see this majestic gift of nature.

Angel Falls drops over the edge of the Auyán-tepui Mountain in the Canaima National Park and a UNESCO World Heritage Site in the Gran Sabana region of Bolívar State. The falls are along a fork of the Rio Kerepacupai Meru which flows into the Churun River, a tributary of the Carrao River, itself a tributary of the Orinoco River. 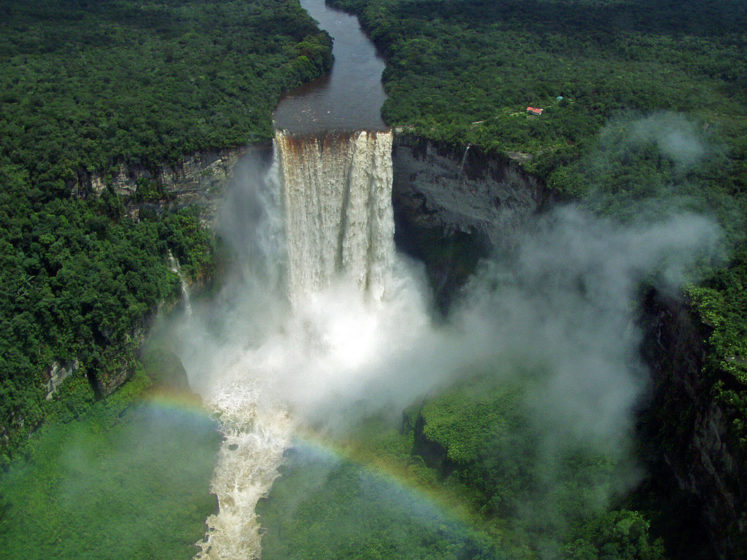 Kaieteur Falls is found in Guyana, is the world’s largest single-drop waterfall by the volume of water flowing over it. This waterfall is 741 ft in height, and when it reaches the first of the many steep cascades. It attracts many tourists, who like extreme trips since the fall is in the middle of a wilderness with no urban amenities.

Kaieteur Falls is among the most powerful waterfalls in the world with an average flow rate of 663 cubic meters per second. The geologists Charles Barrington Brown and his partner James Sawkins discovered Kaieteur Falls in 1870 during their mapping and preparation of separate expeditions.

5. Niagara Falls in the USA/Canada 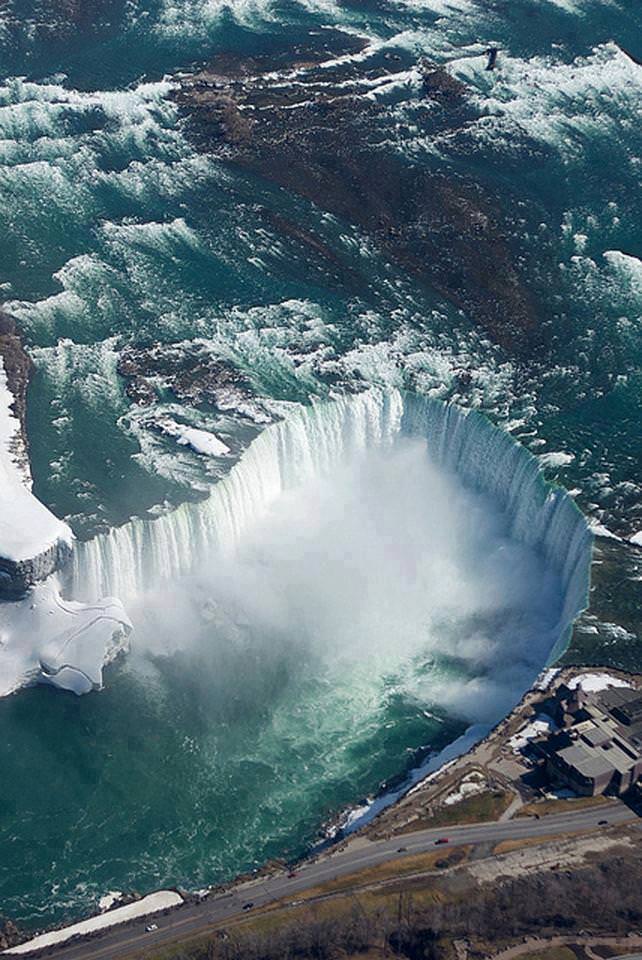 Niagara Falls is perhaps the most famous in the world. It marks the United States and Canada border. Niagara is formed of two sections the Horseshoe Falls on the Canadian side and the American Falls on the American side that is separated by an island.

The Horseshoe Falls are more impressive: water here drops 173 ft (53 m), while the American Falls drop only 70–100 ft. Here you can experience a natural wonder of the world, explore acres of pristine hiking trails and scenic terrain, immerse yourself in outdoor adventure and taste the simple goodness of orchards and award-winning wineries. 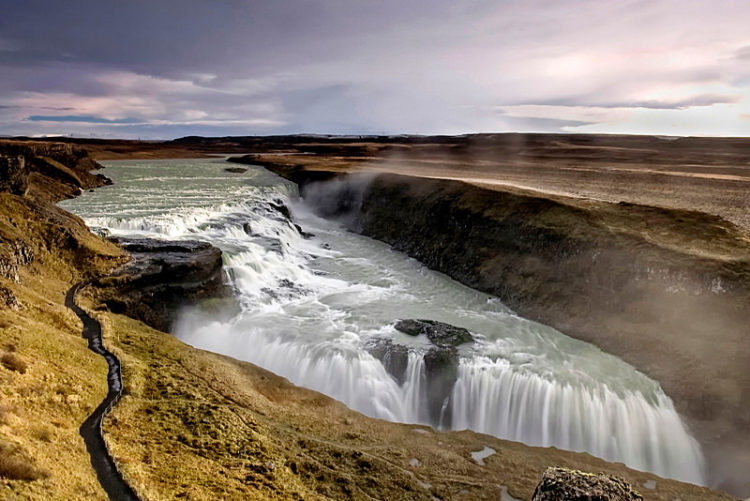 Gullfoss is a superb waterfall located in southwest Iceland. It is not particularly high two 36 ft and 68 ft plunges, but you cannot negate the beauty of this true fall. In fact, it lures everyone due to a crevice, the river Hvítá seems to disappear into the abyss. Gullfoss means “Golden Falls”, was named because the high sediment content of glacial water makes it glow gold in the sunlight as it roars over the cataract. 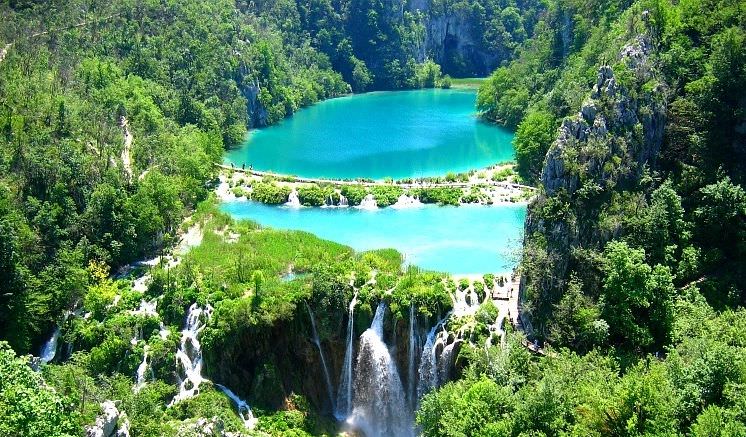 Plitvice Falls are found in Plitvice Lakes National Park, Croatia. They are not very high falls, but are spectacular due to the numerous cascades water has to overcome. There are hundreds of waterfalls. The color of water varies from crystal clear to Azure, to turquoise.

It is one of the oldest national parks in Southeast Europe and the largest national park in Croatia. In 1979, Plitvice Lakes National Park was added to the UNESCO World Heritage register. Each year, more than 1 million visitors are recorded to see this wonder of the world.

8. Yosemite Falls in the USA 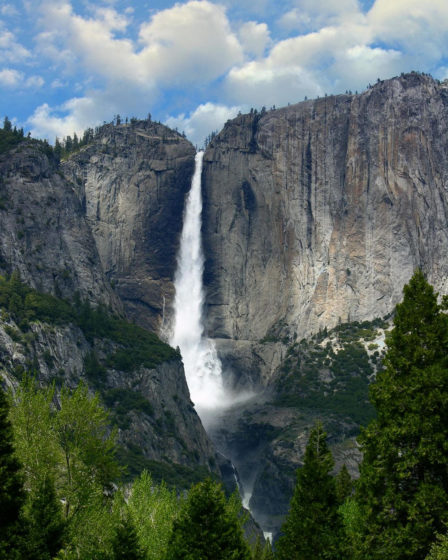 Yosemite Falls is the highest waterfall in North America. It drops 2,425 ft in the Sierra Nevada, California. The source of water is melting snow, therefore sometimes the stream may cease due to a little amount of snow. It’s a major attraction in the park, especially in late spring when the water flow is at its peak.

The waterfall is popularized and attracted tourists from across the country that the historical significance of the falls was such that it could very well have sparked the chain of events that ultimately led to the conservation movement and the eventual protection of lands that would eventually be known as National Parks. 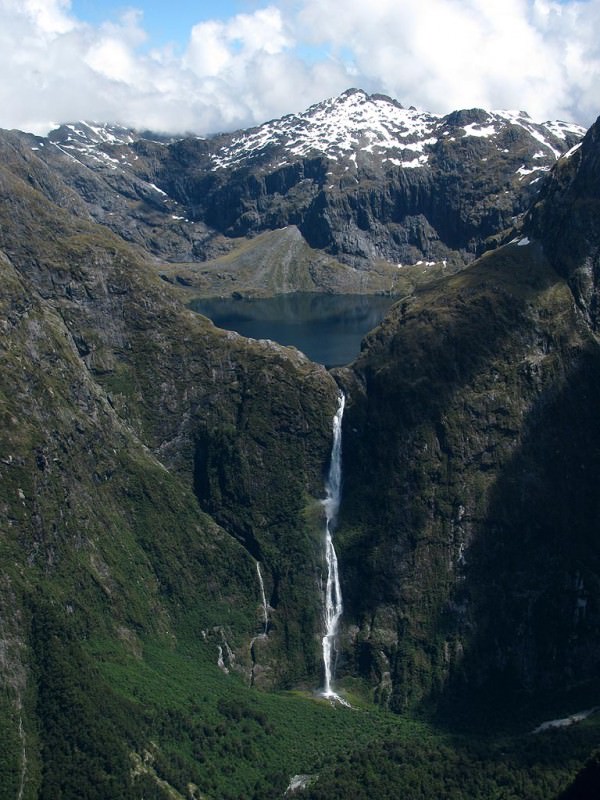 Hence, it was named after its discoverer Donald Sutherland. Its most beautiful angle is taken from above on a helicopter flight when someone can observe the beauty of the lake behind the waterfall framed with snow-capped mountains in the cold seasons.

A waterfall that looks like it has been ripped out of a fairy tale! Waterfalls from a mushroom-shaped cliff that is completely covered with moss! As the water falls off the cliff, it appears as if it’s glowing! This is certainly one of the unique waterfalls of the world! Moss and stone turn this waterfall into an otherworldly liquid veil. In Caras-Severin County in the western part of Romania, the astonishing Bigar Waterfall is so lovely it is even called “the miracle from the Minis Canyon” by the locals.

The stunning Seljalandsfoss is a waterfall is located in the South Region in Iceland. The waterfall drops 197 ft and is part of the Seljalands River that has its origin in the volcano glacier Eyjafjallajökull. Seljalandsfoss is among the most famous and most accessible waterfalls in Iceland. The falls plunge over a sheer undercut cliff, dropping some 200 feet into a small pool. However, the falls leap over a deeply undercut cliff, which allows a trail to pass behind the falls, providing a less conventional view for those who wish to be a bit more adventurous. Because of the presence of the undercut, the falls can be blown around in the wind – violently at times even. 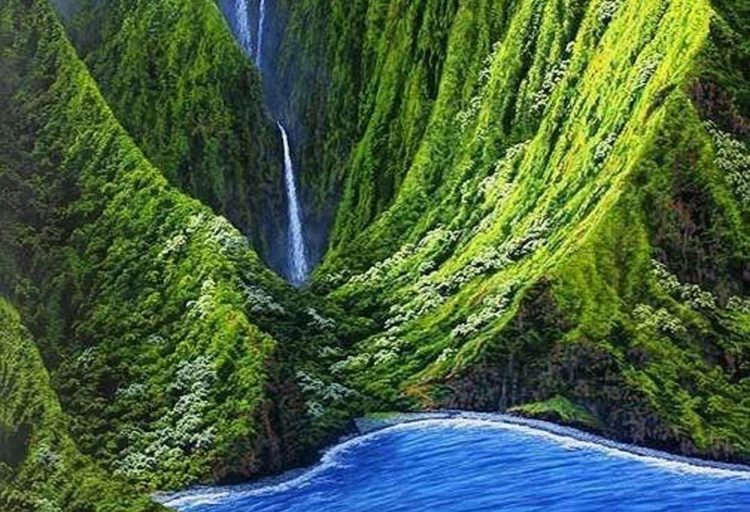 Pu’uka’oku Falls is a waterfall in Molokai, Hawaii. It is the 8th largest waterfall in the world. Pu’uka’oku Falls, according to the estimates from topographical maps are approximately 840 meters tall. The water here is not falling in a free fall – for the most part, it slides down along the nearly vertical basalt cliff. The waterfall is thin and deeply etched in an inaccessible cliff. Due to this it is rarely seen and photographed. 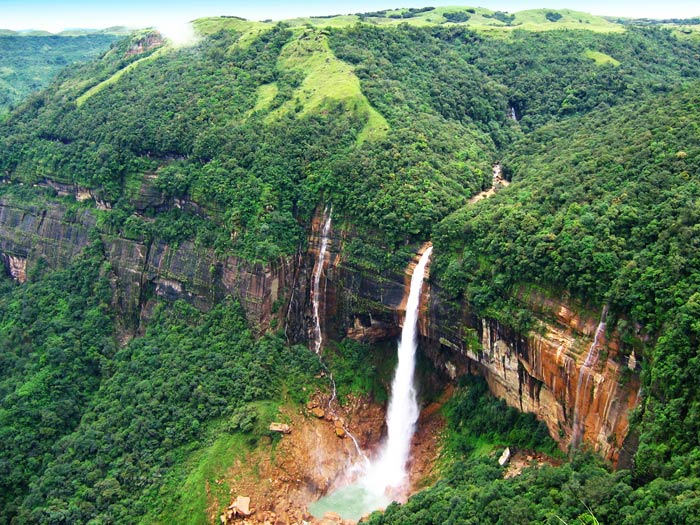 Nohkalikai Falls is found in India. Waterfalls down to 1100 ft. Although the feeding stream is only 1,5 mi long, Nohkalikai is still very impressive. A pool is formed below the fall, in which water receives green color. The waterfall is located near Cherrapunji, one of the wettest places on Earth. Nohkalikai Falls are fed by the rainwater collected on the summit of the comparatively small plateau and decrease in power during the dry season in December – February.