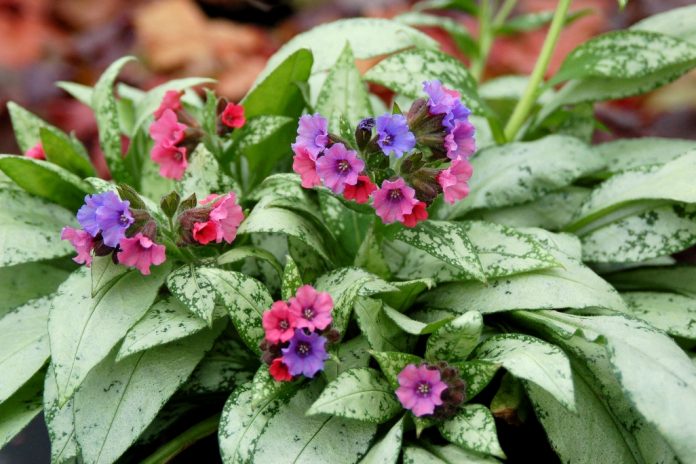 Pulmonaria plant used to be called “lungwort. Its spotted leaves resembled diseased lungs and, in the homeopathic tradition of folk medicine, were thus supposed to be able to cure diseased lungs.

Fortunately, the plant has more demonstrable virtues. It spreads vigorously by creeping rhizomes, its broad leaves make it very attractive as a ground cover planting, and on top of that, it bears beautiful clusters of tube-shaped flowers in spring, which generally open pink and turn to blue, resulting in both pink and blue flowers in the same cluster.

Pulmonaria angustifolia is low growing under 10 inches and has leaves that are not spotted; popular varieties are Johnson Blue and the white Alba. P. saccharata, called Bethlehm sage, grows as tall as 15 inches. There’re so many gardeners who like the variety and whose blue flowers and spotted leaves are both large and very showy. If you find you get along well with pulmonarias, there are a number of other, less familiar species worth trying.

How to Grow Pulmonaria Plant

Well, if you want to grow Pulmonaria, then you need a truly shade-loving plant that will wilt in sun. Even the morning sun that mine gets makes it wilt in hot weather. The soil need not be rich, but it should be full of organic matter to help it to hold moisture. Plants are easily divided in early spring but should be watered well after transplanting.

Also Read: The Sweetly Scented Lily of the Valley

What You Need to Know About Smokable Hemp Flower