Brown Rat arrived in Britain about 250 years ago. Since then, they have established themselves as major pests, and still resist man’s attempts at control. The brown rat arrived in Britain late y comparison with most other mammals, yet it is now more widespread than many which have been here far longer. The key to its undoubted success is its versatility.

It is small enough to move about unnoticed and is well camouflaged by its dull grayish-brown coat. Before the arrival of the brown rat, they were found only in ports. However, it is unlikely that the brown rat contributed significantly to the decline of the black.

Black rats came from the Mediterranean and, can only survive in a warm, indoor environment. By contrast, the brown rat is a native of the Great Russian steppes and finds few climates too inhospitable.

The brown rat thrives wherever man grows food and stores it for him and his animals, provided there is enough cover for living and nesting. Rats often make their homes under sheds and other raised buildings. They gain access to the foundations of houses through damaged air bricks or cracked brickwork.

Once inside a house, the rats soon have the run of it, especially when there are wooden floors through which. They can grow, sometimes, if the cover on a sewer stench pipe is missing, rats may get into a building at the roof level. Where property is empty and damaged, broken bathroom fittings may allow rats to invade surface premises from the sewers below, rats produce litter rapidly and as a result, large numbers soon build up and spend to any suitable habitats nearby.

Two unusual environments in which brown rats have been Successful are coal mines and sewers. Rats are rare today in mines, but still, cause problems in areas and man-made installations; the brown Tat also lives in the open countryside in most parts of the British Isles.

In many countries Fata make their way into farm buildings throughout the year, using under round burrows for shelter and nesting Rats are capable of excavating their own burrows, but often move into disused rabbit warrens to save them the trouble.

If you look closely along the base of hedges, you may see well-worn runways leading to the entrances of underground burrows. The tracks of the brown rat show up in mud and snow. They are characterized by the deep impression made by the claws. In the fields, brown rats dig up the germinating corn and leave a series of telltale ‘scrapes’ behind. They also dig up the roots of many wild plants. In buildings, the presence of rats can be detected by droppings or body smears.

The droppings of the brown rat are sausage-shaped, often pointed at one or both ends, and about 12 mm (in) long. The dark body smears around the edges of ratholes in woodwork or stones, and on places which rats rub against regularly in passing, are produced by the greasy secretions of skin glands.

Damage to food and the fabric of buildings is one reason why rats are undesirable visitors. Another, perhaps more important, reason is that they carry certain diseases, some of which are serious and even fatal to man and domestic animals. The urine of many rats carries spirochetes bacteria called leptospires.

These can survive in damp surroundings and infect people, cattle, and domesticated animals through cuts and abrasions. Once in the new host, the bacteria multiply in the bloodstream and invade the liver, causing jaundice, before finally settling in the kidneys. In the most severe cases, they cause death by kidney failure.

Known as leptospirosis or Weil’s disease, this was once a serious occupational hazard for coal miners, farmworkers, and sewer men. Although much less common today, because of the reduction in the number of rats, it still occurs occasionally. Infected farm stock can pass the disease on to humans. One of the risks of eating underdone pork is that it may contain a rat parasite. This is a small roundworm that lives in rat muscle.

Pigs sometimes eat infected rats and, when this happens, the worm encysts in the pig flesh. Thorough cooking will kill the worm, but if infected pork is not properly cooked and is then eaten, the worms may settle in various parts of the human body, including the eye, and cause severe damage.

Until the middle of this century, rats were endemic around farms, slaughterhouses, and food warehouses, and their numbers were far greater than today. During World War II, extensive research was carried out on rat control, in the hope that losses to precious stocks of imported food could be avoided.

In the course of this work, an important behavioral characteristic was noticed. If a new object was introduced into the rats’ familiar environment, they would avoid it-unlike mice, who eagerly explore new materials. This explained why poisons had until then been relatively ineffective.

The rats treated newly placed poison bait as a new object and only nibbled tentatively. As a result, they ate only enough poison to feel ill. To make matters worse, they then associated their illness with the poison and its food base. Following this discovery, the technique of pre-baiting was developed.

Un-poisoned bait was placed for a few nights to encourage the rats to begin eating with confidence. Poison was then mixed with the bait and the rats ate swiftly enough to take in a lethal dose. This method of control had the disadvantage of being labor-intensive and in the early 1950s, a new poison was developed. This was an anticoagulant, called Warfarin, which prevented the blood clotting and caused the poisoned rats to die of hemorrhages.

More usefully, however, the rats did not associate their deteriorating health with either the poison or its base. Because the method involved regular daily doses over a week or more, it was economical on manpower. Brown rats have been successful in most habitats. Because they produce large numbers of offspring rapidly, any genetic changes operate relatively quickly throughout a population. 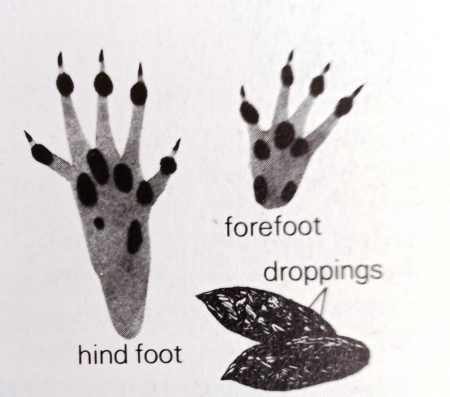 In Scotland and the West Midlands, some rats have become ‘Warfarin resistant and this resistance can be genetically transmitted to the young. This development has been a blow to rodent control and has meant both a return to the older poisons and a search for new ones. The evidence from the past history of the brown rat seems to indicate that this adaptable species will continue to survive.

Nests are loosely constructed out of straw, rags, feathers, or any other available material. The size of the litter depends on the size of the mother: 16 is normal for a large rat, 6 for a small one. The young rats are born naked and blind. Their eyes open six days after birth, and they are weaned after about three weeks.

As both parasite and scavenger, the brown rat mainly depends on man for food and shelter. It is common around man-made installations such as farm buildings, warehouses, and sewers. Even in the open, it pilfers the germinating corn from the soil and, later, the ripened grain from the harvest.

Color – Normally Grey-brown on back paler underneath

Breeding Season – In a constant environment with plenty of food, breeding may be continuous, elsewhere mainly summer and autumn.

Foods – Eats almost anything, feeds on cereals when available.

Distribution – Throughout the British Isles except for a few small islands and more exposed mountains.

What is Pollination – Critical Moment of Flower Life

Leatherback Turtle – Most Dangerous and Endangered Species on Earth

How to Keep Your Horse in Good Shape?