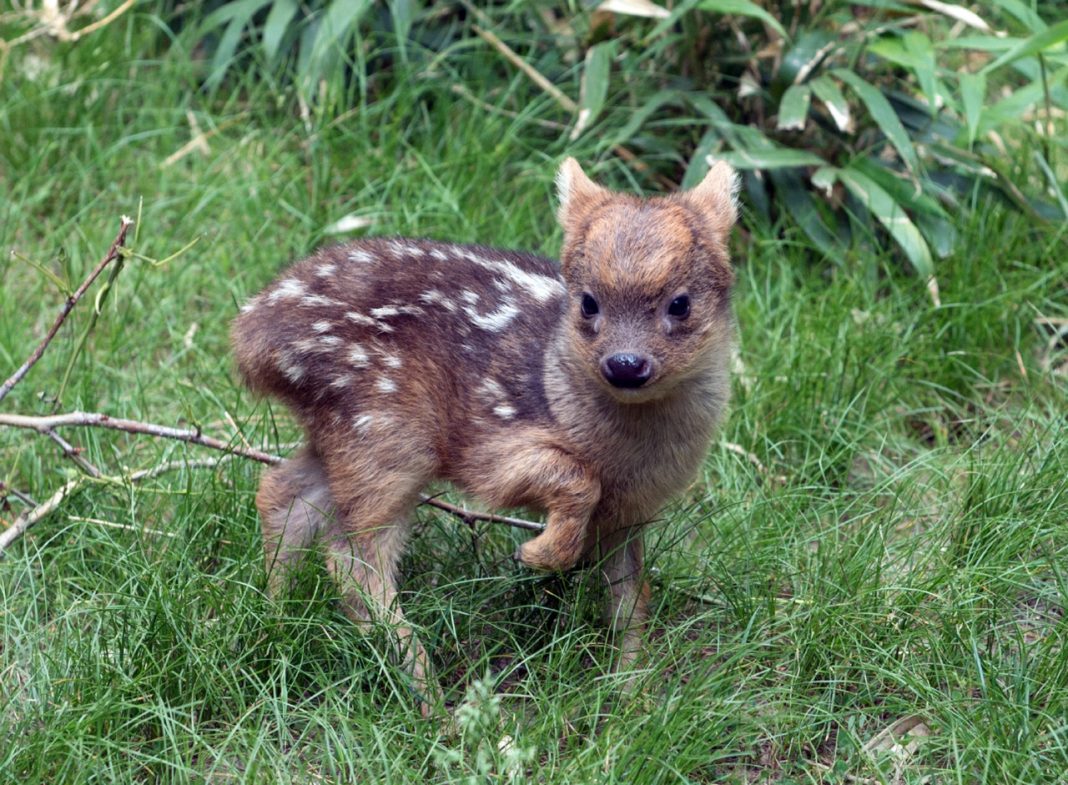 The Pudu is the Smallest Deer in the world, similar in appearance to the northern Pudu (Pudu Mephistopheles), but a little smaller. However, the southern Pudu (pudu puda) has a small glossy reddish-brown to dark brown coat with slightly lighter underparts and legs, extremely cute to look at.

The deer belonging to the Pudu genus even people have captured for pets, which is the main reason for the declining population. The Pudu deer have a reddish-brown coloring on their bodies and their ears and lips are orange shade; however, southern Pudu fawns are spotted with white or perhaps for camouflage.

Their fur is long and coarse which is different from what most deer species offer. The smaller sizes are probably the reasons why people take a keen interest in them. The fully grown deer weight is 26 to 30 pounds and is just over afoot, though males do grow antlers small body size of this animal they’re only several inches in length.

The Smallest Deer normally like moderate winter and arid warm climate, even live in dense forests and often come out to open areas in search of food. The Pudu deer are very secretive in their movements just to minimize the risk of predators finding them. His natural habitat is known to live solitary life other than breeding the young one. They habitually leave massive piles of dung though as a way of marking their territory.

Pudu’s are most active in the morning, late afternoon, and evening but do not interact socially, a very frightened animal and barks when in fear, and their fur bristles and shivers when angered. The Pudu is a very wary animal and moves slowly and stops frequently, smelling the air for scents of predators. However, Pudu is a proficient climber, jumper, and sprinter and flees in a zigzag path when being pursued.

Moreover, the Pudu Smallest Deer has short stature; they like to look at the food on their close grounds. The deer are known to be very adaptable to their environment when it comes to feeding. Normally, they like to eat seasonal fruits but can feed on leaves and twigs from plants and lower branches of trees. The deer can be able to get up on their hind legs to reach the higher-up foods.  Even some deer can climb on trees and go to the distance for the food they’re looking for.

The Pudu breeding seasons start in fall and take almost 210 days for the young to be born afterward. Sexual maturity occurs at about six months of age in females. The female deer only is able to born one fawn due to its smaller body. The young deer is very small at birth weight just three pounds and taking three months to they’re full size. The Pudu deer’s average life span is 8 to 10 years in the wild and the longest recorded lifespan is 15 years and 9 months.

The Pudu Smallest Deer are facing a dwindling population due to its small size, which makes them common prey for a variety of predators i.e. Wild Cats, Cougars, Eagles, Owls, and Fox. The Pudu deer is extremely popular in zoos as well as enticing crowds due to his cuteness. Yes, humans have a great fascination for this small deer and they set out to hunt it, although very few peoples get the chance and success in its idea.

Experts are doing their best efforts in order to increase their population and the quality of genetics can be maintained. The common public cannot see the Pudu deer in the wild due to its natural hideousness and low numbers as well. As of, the species are classified as endangered on the IUCN Red List.

10 Important Facts about Turtles Not Everyone Knows

15 Years old boy Save the Life of Red Fox

The Gobi Bear – A Rare and Threatened Creature