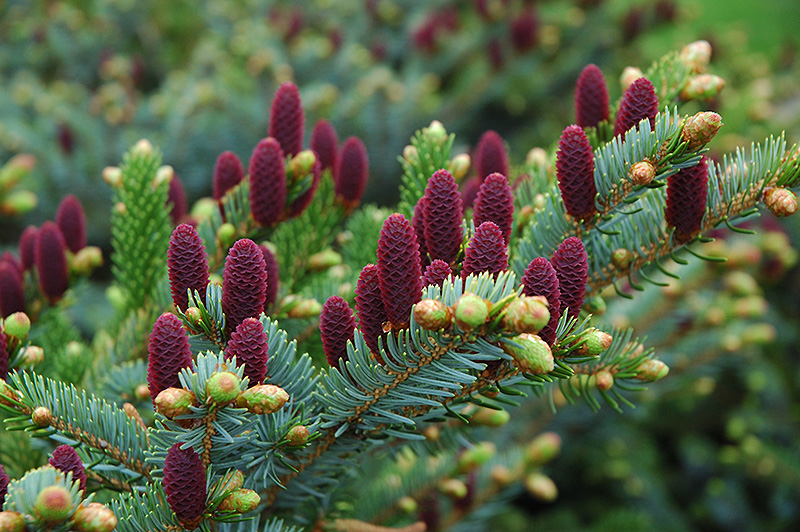 Spruces or Picea are tall, fast growing evergreen trees with symmetrical spire shapes. You can distinguish them from firs. Which they resemble, in two ways; spruce needles can be rolled between the fingers, whereas the needles of the fir and hemlock feel flat. And Picea cones hang from the branches rather then sit on top of them.

A spruce is a tree of the genus Picea of about 35 species of coniferous evergreen trees in the family Pinaceae, found in the northern temperate and boreal (taiga) regions of the Earth.

Colorado Spruce “Picea pungens” is a popular tree with a classic Christmas tree shapes and smell. On healthy specimens, the branches extend all the way to the ground in dense, graceful layers.

Blue spruce “P. p. Glauca” is a very widely grown though the needles of blue spruce have a bluish cast, by the degree of blueness varies from one tree to another. Picea are large trees, height varies from 60–200 ft) tall when mature, and can be distinguished by they’re whorled branches and conical form.

It is a massive tree that can be out of scale next to a home. But they’re are several small ornamental varieties of this spruce. However, the “Nidiformis”, (Bird’s Nest Spruce), which grows to a mere 3 feet with a flat top. All the spruces mentioned are hardy to zone 2.

Well, if you want to grow spruce, than to counteract they’re tendency to lose they’re lower branches, give spruces plenty of sun, and don’t crowd them. Scientists have found a Norway spruce, which reproducing through layering, has reached an age of 9,550 years and is claimed to be the world’s oldest known living tree.

Moreover they will tolerate heat or cold and most soils, including dry ones, but the soil should be well drained. Norway spruce likes a bit more fertility and moisture. Norway and Colorado trees can be planted bare root. Pests include spruce gall aphids, spider mites and scale; dormant oil sprays can be effective against all of them. It is difficult to prune large spruce trees without ruining they’re shape.

Picea is useful as a building wood, used for many purposes, ranging from general construction work and crates to highly specialized uses in wooden aircraft, indoor drywall framing. Moreover it’s material also used in soundboards for a lot of musical instruments, including guitars, mandolins, cellos, violins, and the soundboard at the heart of a piano and the harp. Wood used for this purpose is referred to as tonewood.

They can be trained to one leader while young awkward branches can be cut to a side branch if necessary. But for the most part pruning consists only of removing dead branches. DNA analyses have shown that traditional classifications based on the morphology of needle and cones are artificial.

Picea has been found in the fossil record from the early Cretaceous, 136 million years ago. Picea are used as food plants by the larvae of some Lepidoptera moth and butterfly species, also used by the larvae of gall adelgids (Adelges species).

Cranberries Get You Bogged Down

Top 25 Oak Facts You Should Know

The Unusual Bottle Tree of Queensland

The Facts of Halesia tetraptera